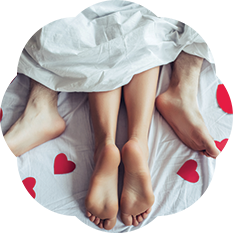 In utero a female foetus will have several million eggs, by birth the female has 2 million oocytes and by puberty only approximately 400,000 to 500,000 remain.

During her life she will ovulate 400 of these oocytes but each month many oocytes will undergo a process called atresia where they will die.

The ovaries are approximately 2-3cm in diameter. Each month they many oocytes are prepared to ovulate but only one becomes the dominant follicle that releases the egg. Even though we talk about a 28-day cycle only 15 % of women actually have a 28-day cycles. An ovulatory cycle is one between 24-35 day if a cycle is shorter or longer than that then ovulation may not be occurring regularly.

Ovulation occurs 14 days before the menses commences. The first phase of the menstrual cycle prior to ovulation is called the follicular phase and the second phase is called the luteal phase.

Ovulation occurs approximately 24 hours post the LH surge. The mature oocytes ruptures outside the follicle and the follicle now becomes the corpus luteum that fills with blood and produces progesterone which changes the endometrium to secretory producing nutrients for a developing embryo - progesterone is belongs to the family of opiods and hence often results in premenstrual syndrome such as swollen breasts, lethargy and increased moodiness. Progesterone also causes the temperature to increase post ovulation and results in thick cervical mucus production.

Fertilisation must occur 24 hours post ovulation - the egg lives for approximately 24 hours and the sperm lives for 72 hours. When the oocyte is released the follicle ruptures - medicines such as non-steroidal anti-inflammatories and anti-prostaglandins will inhibit follicle rupture and cause an entrapped oocyte. The fimbriae are the flower like end of the tube will wrap around the ovary and pick up the egg. Fertilisation occurs in the ampullary area of the fallopian tube.

Release of 2 oocytes and fertilisation results in non-identical (fraternal) twins - each embryo has its own placenta compared to identical twins that result from one fertilised oocyte that splits.

The cervical mucus at midcycle helps aid the sperm through the canal but only the strongest sperm make it to the ampullary end of the tube the sperm takes approximately 30-60mins to reach this part of the tube. The sperm then attaches to the thick outer shell of the egg called the zona pellucida - the sperm must then move very fast with 800 times a second to generate sufficient force to enter the egg and the egg and sperm also release certain enzymes that enable it to penetrate the barrier. Usually only one sperm enters - fertilisation with ore than one sperm results in abnormal fertilisation. The cilia within the tube, which are fine hair like structures, move the fertilized egg, now called a zygote, down the fallopian tube to the uterus. This journey takes 5 days. By the time it reaches the uterus it is called a blastocyst that contains more than 60 cells and has a cavity and an inner cell mass that will become the embryo.

The embryo buries into the endometrium, which is usually over 7mm thick and starts to stimulate the production of human chorionic hormone (HCG) which signals to the corpus luteum to continue to produce progesterone. Production of progesterone keeps the developing embryo alive until the placenta takes over production of hormones until 10-12 weeks. HCG is measured to detect pregnancy and can be detected as early as 5 days post ovulation in the blood.